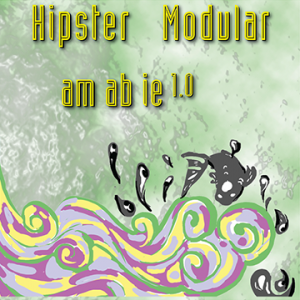 Amabie (アマビエ) is a legendary Japanese mermaid or merman with 3 legs, who allegedly emerges from the sea and prophesies either an abundant harvest or an epidemic. We leverage this theme of 3 limbs for our electronic art event – The Artist, the Musician and the Audience. The Hipster Modular recordings (aka “Fragments”) documented here were captured during the 5/7/2020 “am ab ie” event with the cover art painted in realtime via aggie.io.

1. Artists // Artists paint or draw with the collaborative Aggie.io platform. They can see their collaborations in real-time. Their painting is shared in real-time via Zoom.

2. Musicians // For electronic performances, audio is mixed and sent directly to Zoom. In this performance, audio was mixed (and tracked) with Ableton Live, then sent via anlog connection to a Zoom Q2n-4k camera for input into a MS Surface running Zoom, with Hipster Modular logo as a virtual background.

3. Audience // The combination of the drawing, event flyer and musician audio and video are shared to Youtube Live. The archive can be viewed at: https://youtu.be/a2CaNutczhU

Server // Since a solid network is key and Zoom doesn’t always play well with real-time drawing applications, a “server” on a fast network is used to combine Zoom with Camtwist desktop sharing.

Instrumentation // The musical performance utilized a collection of acoustic instruments, Doepfer harware modular (with Eventide H9Max effect), Roland TR-09 drum machine (with Obscura effect), SH-01a ynthesizer and a VCV Rack virtual modular rig. The soundscape was mixed and recorded with Ableton Live. The Flügelhorn, Shakuhachi and Frame Drum (played with specialized dual-egg-beater whisks, pictured above) was looped with a TC Voicelive Touch 2 and routed via USB into the mix computer.

The virtual modular Rack (pictured below) included 3 probability-driven synthesizer voices, a synthesized drum, a sampler (for one Fauci phrase), delay and reverb effects. The Rack was controlled using a Behringer X-Touch mini with the TrevoCon-X-Touch M4L plugin. The virtual modular was sync’d with with Link and stereo mix sent to the mix computer with Dante Via. The 90-minute live recording was sliced into 10 logical Fragments (of less than 10-minutes each). Each Fragment features (and is named after) a prominante Fauci sample. The Fragments do not repeat any sample except for the “Placebo Controlled” processed phrase from the VCV Rack. The first 8 of those Fragments are presented on this audio CD. For more information see: http://Whatismodular.com/PHP012

Credits // Concept and curation by T. Henthorn and Gen Cover
drawing by Gen Music by Hipster Modular
Fragmentation and Master by T. Henthorn

Follows is a screenshot of the VCV Rack used for this CD. 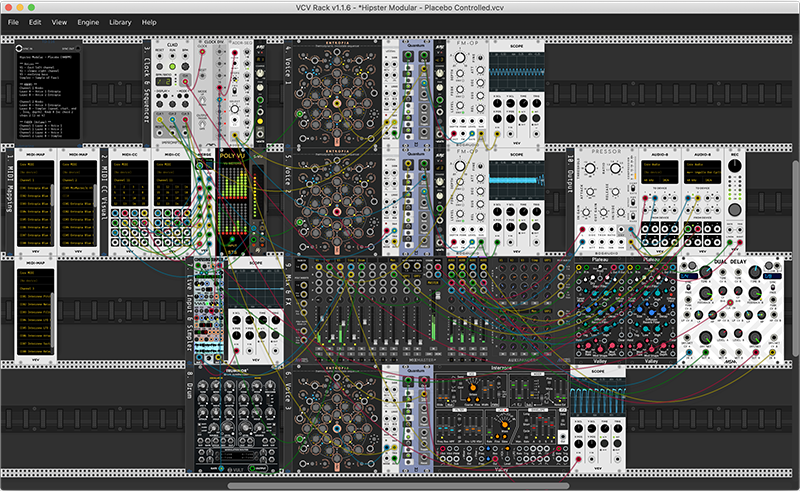 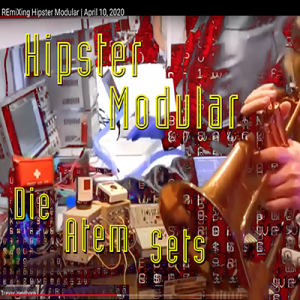 “die Atem Sets” is a capture of a live, online performance by Hipster Modular on 4/10/2020. The performance was shared in 4 areas – via Youtube, with Remixed projected video, back onto Youtube Live and via Radio Axiom. The intent was to communicate essential information through repurposed media. The audio was archived and re-shared in 4 parts.

Breathing (or ventilation) is the process of moving air into and out of the lungs to facilitate gas exchange with the internal environment, mostly by bringing in oxygen and flushing out carbon dioxide.

A ventilator is a machine that provides mechanical ventilation by moving breathable air into and out of the lungs, to deliver breaths to a patient who is physically unable to breathe, or breathing insufficiently. Modern ventilators are computerized microprocessor-controlled machines, but patients can also be ventilated with a simple, hand-operated bag valve mask. Ventilators are chiefly used in intensive-care medicine, home care, and emergency medicine (as standalone units) and in anesthesiology (as a component of an anesthesia machine). During the pandemic of 2020, the U.S. president turned ventilators into a form of patronage while the California state positioned itself as a “Nation State” to procure and redistribute the medical equipment. As such, the term “ventilate” is now associated with political posturing.

The Hipster is “A person who follows the latest trends and fashions, especially those regarded as being outside the cultural mainstream.” The Atem (German for breath) is a living process that is essential to life itself. The tools such as ventilators come and go with infection statistics – they are the embodiment of trend – a fashion that follows viruses, culture, political lies, political posturing, and random environmental factors – the chaos surrounding the Atem character establishes it as a passive hipster.

The Visual presentation of the “Atem Sets” is live performance video chromakeyed onto a collection of 4 media backdrops – (1) a static image, (2) video from a side camera, (3) video from a rear camera, and (4) video of makeshift, emergency, ventilator research labs. The produced video is broadcast via Zoom and recast to Youtube Live for public consumption. The same video is captured by Radio Axiom, reprocessed, projected, recaptured and rebroadcast. The total media, from 4 sources, is repurposed 4 times.

The Sonic presentation of the “Atem Sets” leverages live/looped breaths and flügelhorn combined with essential instructions for those suffering from Covid-19. Synthesis techniques from the ’60s, ’80s and 21st century are used to produce a final soundscape which is then cut into 4 pieces.

Sample credit:
UK Dr. Sarfaraz Munshi of Queens Hospital demonstrates breathing techniques for COVID-19 patients who are struggling to breathe or having a cough fit. 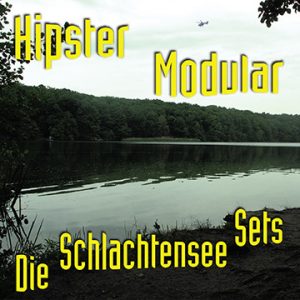 Schlachtensee is a lake in the south west of Berlin, in the Steglitz-Zehlendorf borough, on the edge of the Grunewald forest. The lake lends its name to the surrounding area and which has been part of Berlin since 1920. While, it is the city’s most easily accessible lake (next door to both S- and U-Bahn stations), it is surprisingly free from hipster culture. Some have proposed that this state is intentional, claiming that the recent summer ban on dogs (the controversial “Hundeverbot”) is an underhanded attempt to curtail hipster-like activites.

The literal definition of a hipster is: “A person who follows the latest trends and fashions, especially those regarded as being outside the cultural mainstream.” Many consider Berlin to be one of the most hipster-friendly cities in the world, 2nd only to Brooklyn, New York. Schlactensee is sufficiently outside of the city, a 15 km hike from Kreutzberg (the hipest area of Berlin), and, so, is considered one of the rare “outside-of-outside” spaces (geographically, aesthetically and culturally).

This collection brings together a modularization of field recordings from the area with compositional form based on local, environmental photos, along with signal processing and synthesis techniques from the ’60s, ’80s and 21st century.

These are the Hipster Modular Schlachtensee Sets.

Order the AVRCD011 CD or downloadable album and book from Bandcamp. 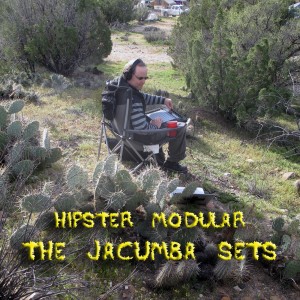 Jacumba Hot Springs is a census-designated place in the Mountain Empire area of southeastern San Diego County, California with an elevation of 862 meters. The Kumeyaay peoples occupied the Jacumba area prior to European settlement. Then, Ranchers occupied the area in the 19th century and were often in conflict with the Indians. At the turn of the 20th century, the health and relaxation benefits of natural hot springs were commercialized. By 1925 the town had a world class hotel and by the 1930s, Jacumba developed into a top destination. After the new Interstate 8 bypassed Jacumba by two miles, most of the roadside service businesses folded and the community went into economic decline. The Jacumba Hotel closed and was destroyed in an arson fire in 1983 and the ruins stood until 1991. The great public baths closed, the swimming pool was filled in, and the well was capped. The area continues to attract foreign visitors, motorcycle tourists, ravers and hipsters. The 21st century hipster is part of a subculture that values independent thinking, counter-culture, progressive politics, an appreciation of art and indie-rock, creativity, intelligence, witty banter and modular or computer-generated modular-like synthesis. Although “hipsterism” is really a state of mind, it is also often intertwined with distinct fashion, polyrhythms and non-just intonations. Despite misconceptions based on their aesthetic tastes, hipsters tend to be well educated and often have liberal arts degrees, or degrees in maths and sciences, which also require certain creative analytical thinking abilities. Consequently many hipsters tend to hold jobs in the music, art, and fashion industries. It is a myth that most hipsters are unemployed and live off of their parent’s trust funds.

These are the Hipster Modular Jacumba Sets.

Order the AVRCD010 CD or downloadable album from Bandcamp.